We spent the second half of our honeymoon on Kauai, Hawaii. After five nights on Maui and enjoying the beautiful beaches there, I was so pumped to see Kauai and all its lush beauty I had been hearing about. We found the food to be better than on Maui and the restaurants to be much more vegan-friendly. Here is a review of our eats (and some adventures) on the gorgeous island of Kauai! 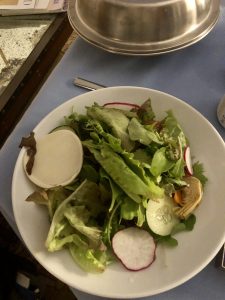 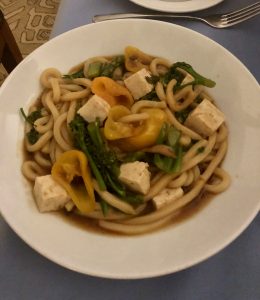 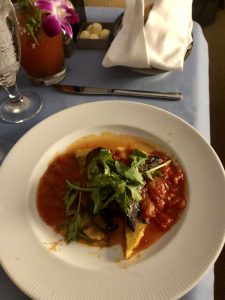 AJ generously drained his Starwood points and booked us five nights at the St. Regis in Princeville that had beautiful views of Hanalei Bay. The first morning we were awakened around 5 a.m. by the cockadoodle doo-ing of the local roosters (wild red jungle fowl).

Interestingly, none of the restaurants at the hotel had vegan options on their menus but the room service menu did. We splurged on room service on our last night (both of our first times having a room service meal) and were really pleased with the meal! We had a salad (the salads on both Kauai and Maui were amazing) and bread, udon noodles with tofu and veggies, and a super tasty dish including polenta, mushrooms, marinara sauce and arugula (making my mouth water as I type this!). 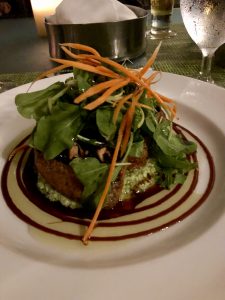 We ventured to a nearby hotel that had a separate vegan dinner menu (wahoo!). We had salad (surprise) and I had a dish that was like a fancy tower of black rice, fried tofu, edamame puree and arugula. It was incredibly tasty! Unfortunately we were too full to try the dark chocolate fondue. 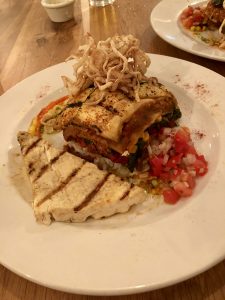 This cute restaurant is in a small touristy town adjacent to where we were staying. It’s in a reconstructed plantation home and is entirely pescatarian. I tried “the sombrero” which was corn tortillas layered with grilled vegetables, beans and rice. I had them add grilled tofu too. It was OK on flavor. We also tried the tofu-cashew-based chocolate silk pie which also was just OK. Nothing remarkable but a solid option for a balanced vegan meal (and dessert). 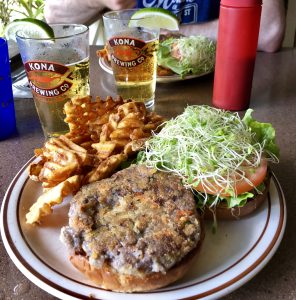 This is your typical bar and grill that has a vegan veggie burger. The burger was taro based, had little flavor, was mushy and fell apart. The fries were good and the beer was cold. Nothing else to say here! 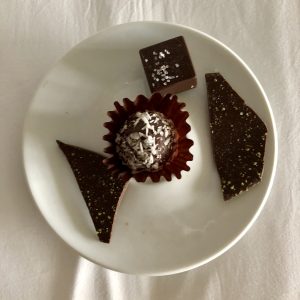 While walking back to the car after lunch at Kalypso I spotted this little chocolate shop and had to stop (obviously). When chatting with the employee and asking if any chocolates were vegan, she pointed out all the options and said she was vegan too and gave us some more food recommendations. It reminded us of our trip to Paris last year when we stopped in a vegan chocolate shop and the owner gave us more vegan recommendations. I like this trend on our travels!

We savored our treats over the next couple days lounging around the hotel. They were all excellent but I have to give a special shout-out to the truffles as those are hard to find vegan! 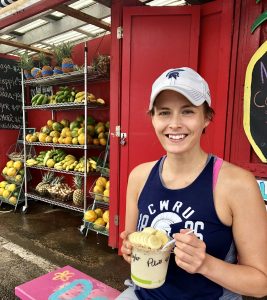 We stopped by this food truck to replenish after a muddy and sweaty hike on Okolehao Trail (Which is really not as strenuous as this makes it sound – you just have to go slow and be smart with the muddy trail. It’s a fun little hike with a couple good views of the harbor.). We shared a giant protein smoothie-turned-bowl by adding granola and sliced banana and were thoroughly satisfied. 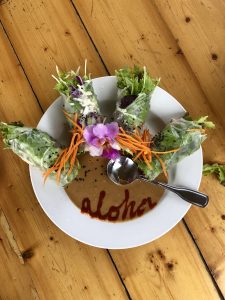 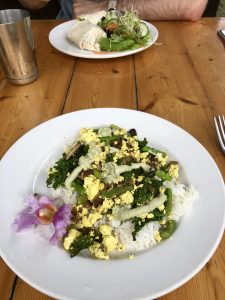 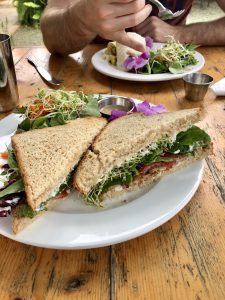 This is the only vegan restaurant on the island (that isn’t all raw) and we went twice for brunch/lunch (I wish we had time to go for dinner because their dinner menu looks dope). It has the cutest decor and lots of wild chickens hanging out on the patio where you eat. I was super excited about being so close to them and then one jumped on the table and stole half my sandwich! All the tables have spray bottles of water (“chicken sprayers”) to keep them away from your food. Greedy little suckers.

We tried the tempeh sandwich, breakfast burrito, tofu scramble, summer rolls and a chocolate chip cookie. The food was good but didn’t blow me away. It had a great variety of choices for all meals of the day, including dessert. The ingredients were fresh and the portions were appropriately sized for a single sitting. 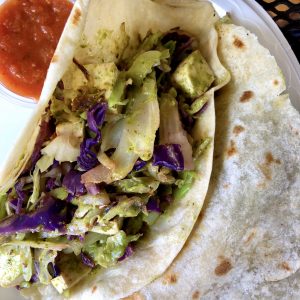 AJ and I had the best tacos of our life at this unassuming taco joint. We had to wait in line quite awhile to place our order but it was totally worth it. I wish we had time to go back and try all the tofu flavors but the cilantro-lime tofu that I had ROCKED. It tasted like a zippy chimichurri (which I love) and was sooo delicious. There is limited seating so if it’s busy, you likely won’t get a seat.

This is a little health food store we stopped at on our way from the airport to the hotel for the first time. We were able to stock up on cereal, almond milk, crackers and cashew cheese. They didn’t have a ton of vegan stuff but it’s a decent place to stop for provisions and is on the way from Princeville down around the east side of the island. 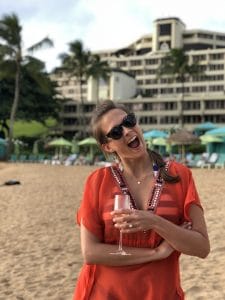 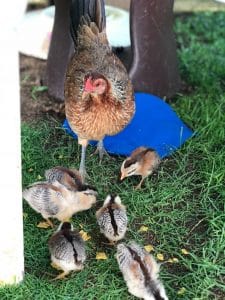 Kauai was arguably the most beautiful place I have ever been in my entire life. It’s the oldest Hawaiian island with incredible biodiversity (its nickname is “The Garden Isle”). If you’re looking for beauty and adventure, Kauai is the place to go. The food was really great overall. We were worried after having a less-than-stellar experience on Maui and knew that Kauai was less populated. But Kauai turned out to be way more vegan-friendly than Maui and with much tastier options! I didn’t love Princeville and would be interested in renting an apartment in Waimea on our next trip (because obviously we will be back!). The one benefit to Princeville is it’s close to Na Pali but for the time being you have to go allllll the way around the island to get there due to flooding and washout (check local advisories when planning your trip). 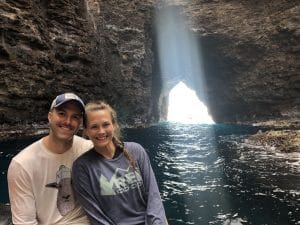 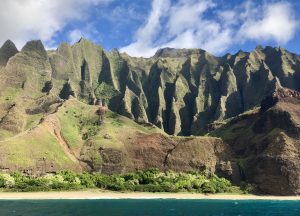 If you like adventure, water and beautiful nature, this is a must! Hang on tight unless you want to fly off the 24-foot zodiac boat into the ocean. Tour guides are all born-and-raised residents of Kauai and do an amazing job of driving the boat, sharing stories about the area, pointing out cool sights and having a super fun time. It takes about 3½ to 4 hours to ride out to the Na Pali Coast and back, including a break for snorkeling and snack (we had fresh pineapple and chips). The biggest benefit to these little raft-like boats rather than larger catamarans is that you get to go inside the sea caves! 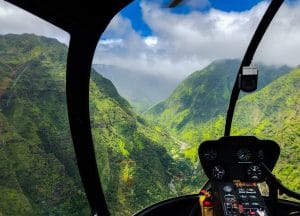 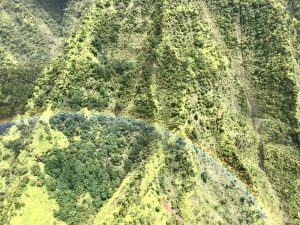 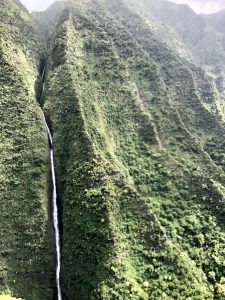 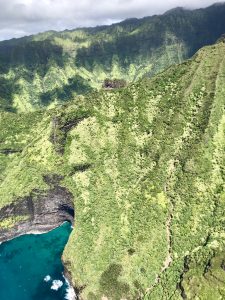 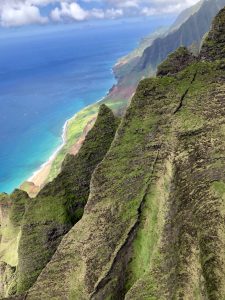 We did this the day after the boat tour and I’m so glad we did. It was amazing to see Na Pali from the sea as well as the air. We flew over SO MANY waterfalls (like hundreds – they don’t even all have names – it’s insane) and the beautiful lush rainforest, canyons and craters. If you want to see where Jurassic Park was filmed, do this tour (with the doors off)! Our pilot was awesome and I felt very safe the entire time (this was my first helicopter flight). The photos do not do it justice AT ALL. This is such an incredible, breath-taking experience that I highly recommend!