Time for some serious real-talk about a sensitive topic today, folks!

I recently received some nasty troll comments on social media when I shared this:

These comments were from people who weren’t following me and they were downright horrendous. If you think fatphobia isn’t a “real” problem, let me tell you, it is alive and well. At first I started engaging with these trolls and even went so far as to direct message research studies to one of them (which of course went unanswered, because trolls aren’t interested in productive dialogue or learning new information, even though they asked for me to show them the research). Another non-diet RDN stepped in and suggested I report and block them which is what I started doing. This wasn’t my first experience with trolls, but it was my first experience with multiple bigoted comments on the same post.

To be honest, I have been planning on writing a series of posts gently diving deeper into fatphobia and weight stigma so as to not turn off any of my audience, but you know what? This is a serious problem and there is no beating around the bush.

First, I want to acknowledge my privilege of living in a relatively thin body that is white and not stigmatized in our society. My body image issues pale in comparison to the daily microaggressions and systemic oppression people of size face in our culture. That doesn’t mean my struggle isn’t real, I’m just keeping it all in perspective here. Part of being an effective ally is checking our privilege when we have conversations like this.

This is not at all a comprehensive discussion of fatphobia and weight stigma and it of course is through my lens of living in a non-stigmatized body. I’m looking forward to your comments and reactions to this post to keep the conversation going!

If you break down the word, fatphobia simply means fear of fat. I think we can all agree that our culture has a major fear of fat. According to 2017 figures, weight loss is a $66 billion industry. From bars, shakes and preportioned meals to teas and pills, there is no shortage of products that promise to help you drop pounds fast. You can diet online and in-person, have your digestive tract shrunk or chopped up and even have your stomach pumped after you eat (yes, the FDA really did approve this “assisted bulimia” contraption). It seems people will do just about anything to avoid being fat or to rid themselves of fat, regardless of the side effects and medical risks.

Open up any magazine or social media platform and you’ll see thin bodies galore. Thin is beautiful in our culture. Yes, curves in all the right places is great too, but a flat stomach usually is a requirement. It wasn’t always this way. Beauty ideals have shifted over the past several centuries and while thin is in, it used to be a sign of poverty. Plumpness was preferred in the Victorian era while slenderness rose to popularity in the 20th century a la flapper girls of the 1920s and the tiny-waisted housewives of the 1950s. The rise in digital media no doubt has contributed to the increasing focus and value of a woman’s physical form.

Diet culture is a product of patriarchy, a way to keep women in small spaces, both physically and emotionally. If we’re constantly focused on the latest diet and trimming away fat, then we won’t have time to be politically active or fight for social justice. But I digress — perhaps I’ll pen an entire post on the link between feminism and fatphobia in the future.

What is weight stigma?

According to Tomiyama’s 2014 article, “weight stigma is defined as the social devaluation and denigration of people perceived to carry excess weight and leads to prejudice, negative stereotyping and discrimination toward those people.” Weight stigma leads to a vicious cycle of stress, increased eating, increased cortisol, increased weight gain and further weight stigma. Shaming someone for being larger not only causes them to gain more weight, it causes psychological harm as well. Nothing good comes of being biased against people of size.

Unfortunately, weight stigma is extremely pervasive — in our health care system, in our educational system and all throughout the workforce. People who are larger are more likely to experience anxiety, depression, low self-esteem and body image issues. Weight stigma also increases the risk of eating disorders. It’s even been suggested that weight itself isn’t the cause of all the “obesity-related health conditions,” but weight stigma.

All the work to “combat obesity” is a part of the problem and is only perpetuating the extreme focus on weight. It has caused an increase in discrimination and bias against larger people as well as internalized weight stigma, which is particularly harmful. Some health conditions are overdiagnosed in larger people and underdiagnosed in smaller people because we align size with health. On the flip side, when we take the focus off weight and instead help people find enjoyable lifestyle and self-care behaviors that support good health, we see positive changes.

We also can’t ignore that some risk factors just are not controllable. Fat doesn’t equal lazy. There are countless factors that impact body size and just a few are those we can modify. Social determinants of health are way more impactful than lifestyle behaviors and some people don’t want to admit that.

This is why intersectionality is so important. Picking and choosing who we treat with respect harms everyone. While the term originated as a way to include women of color in the second wave of feminism, it’s extended to include all marginalized groups in our modern world, including people with disabilities, sexual minorities, immigrants, larger people and people of all religions and cultural backgrounds.

What can I do to combat fatphobia and weight stigma?

I had a lovely chat with fellow non-diet dietitian Ashley Lytwyn, MS, RDN, LDN, who works with clients with eating disorders, about fatphobia and what we can do about it. We discussed how weight stigma is taught to us by our culture, family and friends and how you really have to be a fighter to get out of diet culture because it is so pervasive.

So how do you fight fatphobia and challenge weight stigma? Here’s a list Ashley and I came up with: 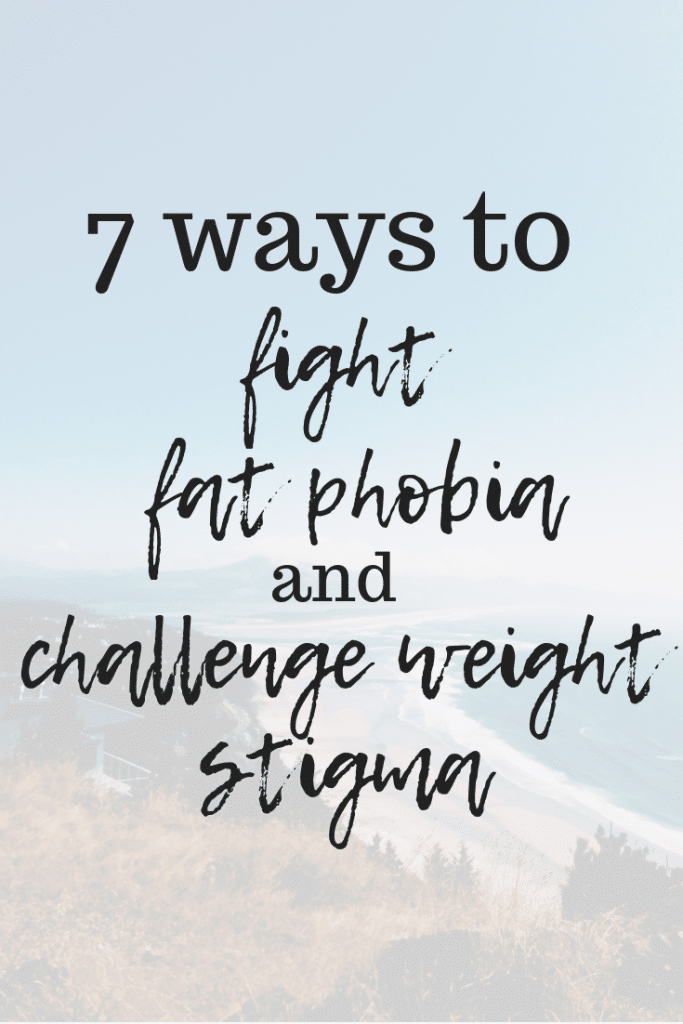 📣Calling all vegans! What do you wish registe