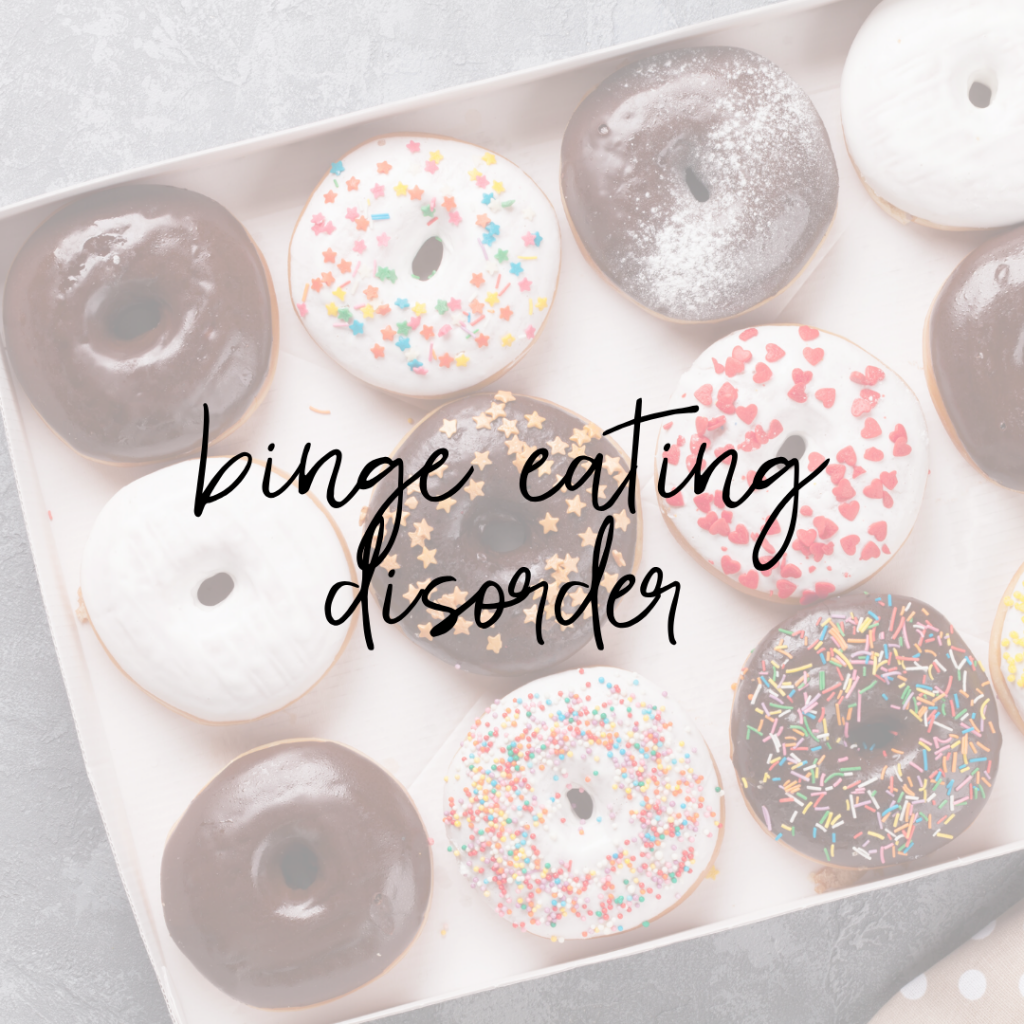 Think you might have binge eating disorder? Learn the facts about this common eating disorder, when to seek help and how to improve your relationship with food.

When most people hear “eating disorder” they often think of anorexia nervosa and envision a very thin, sickly-looking young white woman. Turns out that not only is anorexia not the most common eating disorder, but people of all shapes and appearances suffer from anorexia.

So, given how common and under-recognized this eating disorder is, it’s a good idea for all health care and helping professionals to know the basics about it.

And, for anyone struggling with a difficult relationship to food and bingeing, know that you deserve help! It’s not “just a lack of willpower.”

What is Binge Eating Disorder?

According to the National Eating Disorders Association (NEDA),

“Binge eating disorder (BED) is a severe, life-threatening, and treatable eating disorder characterized by recurrent episodes of eating large quantities of food (often very quickly and to the point of discomfort); a feeling of a loss of control during the binge; experiencing shame, distress or guilt afterwards; and not regularly using unhealthy compensatory measures (e.g., purging) to counter the binge eating.”

BED wasn’t formally recognized in the DSM (the Diagnostic and Statistical Manual of Mental Disorders published by the American Psychiatric Association) until its fifth edition published in 2013. It was previously identified as a subtype of EDNOS (eating disorder not otherwise specified – now referred to as OSFED, other specified feeding or eating disorder).

What’s the Difference between Overeating and Bingeing?

I spoke with Jennifer McGurk, RDN, CDN, CDE, CEDRD-S, who treats people with binge eating disorder, to gain her expert insights on this topic. According to McGurk, “The biggest difference between overeating and a binge is the way someone feels about it.”

Bingeing is characterized by feeling a loss of control with food and then feeling bad about it. There is no specific portion of food that distinguishes overeating from bingeing – it’s more about how someone feels.

Obviously, this is tough to measure because it’s pretty subjective. “There can be a positive overeating experience, binge eating disorder, and also a grey area in the middle,” says McGurk.

We’ve likely all had positive overeating experiences when we’ve chosen to overeat for a variety of reasons (the food is just so good; it’s a celebration or holiday; you’re on vacation eating at a special restaurant you won’t ever visit again; your grandma made her special recipe; etc.). This is different from someone who eats a large amount of food in secret, hiding it from their family and friends, and feels immense shame about it.

McGurk emphasizes the importance of working with a dietitian because this is such a nuanced situation.

She also feels the once-a-week-for-three-months criteria for BED diagnosis can be problematic. What if someone binges three weeks out of a month? What if it’s every other week? That doesn’t necessarily mean they don’t have BED and don’t deserve help for it.

Bottom line: If you even think you might have BED, it’s time to talk to someone about it. And even if you don’t have BED, working with a dietitian can help you feel better about food. 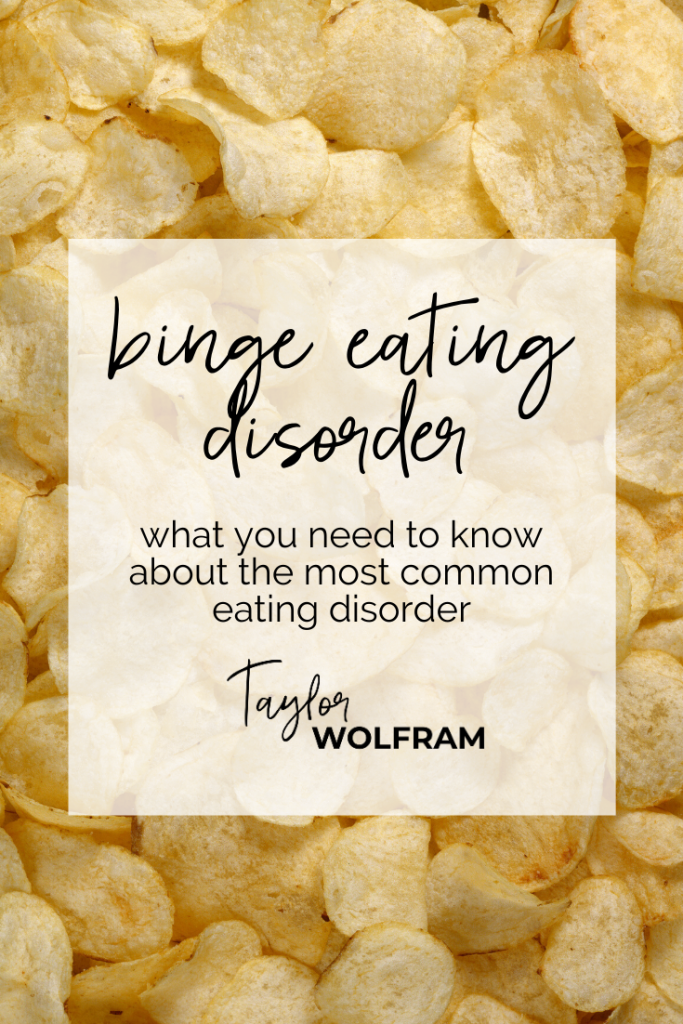 There is no single cause for BED and people with BED may have experienced a variety of contributing factors. People of all shapes, sizes, ages, genders, races and ethnicities can get BED.

There are genetic, social and trauma-related origins of eating disorders. For example, mood disorders, addiction, abuse as well as dieting and weight loss attempts can all play a role in the development of BED.

McGurk remarked that there is more research emerging about the relationship between food insecurity and binge eating disorder. This makes sense biologically. If you’ve experienced food scarcity, it’s natural to eat as much as possible when you have access to food. This is an evolutionary behavior that helps protect us from starvation.

I did a quick search and found two recent studies investigating the relationship between food insecurity and BED: this one in adolescents and this one in adults.

NEDA lists a variety of causes for eating disorders here, including weight stigma.

One thing is certain: YOU did not cause your eating disorder.

How Do You Overcome Binge Eating Disorder?

First and foremost, working with professionals trained in binge eating disorder is key. They can help you figure out where the bingeing is coming from. According to McGurk, reasons for bingeing could be nutritional, hormonal, emotional or associative, and most people binge for a variety of reasons.

It’s important to work with a care team, not just a single provider. Mental health professionals will help you sort out the emotional and associative parts behind bingeing, a physician can help with hormonal concerns and a dietitian can help you with the nutritional part.

For example, McGurk explains that meal planning during the day is an important strategy and many people with binge eating disorder restrict during the day and binge at night.

Having a well-fed brain is imperative to effective treatment, McGurk explains. When a person is properly nourished, they’re able to participate in therapy and learn and apply coping skills.

Once a consistent eating routine is established (regular meals and snacks that are nourishing and satisfying), your providers can help you learn to recognize and listen to hunger and fullness cues, explore “emotional eating” and begin to challenge “binge foods.”

Because bingeing can be triggered by restriction, dieting is a no-go for binge eating disorder. Restriction can be literal, as in you don’t have access to food, or mental, as in you’re telling yourself you can’t have certain foods. 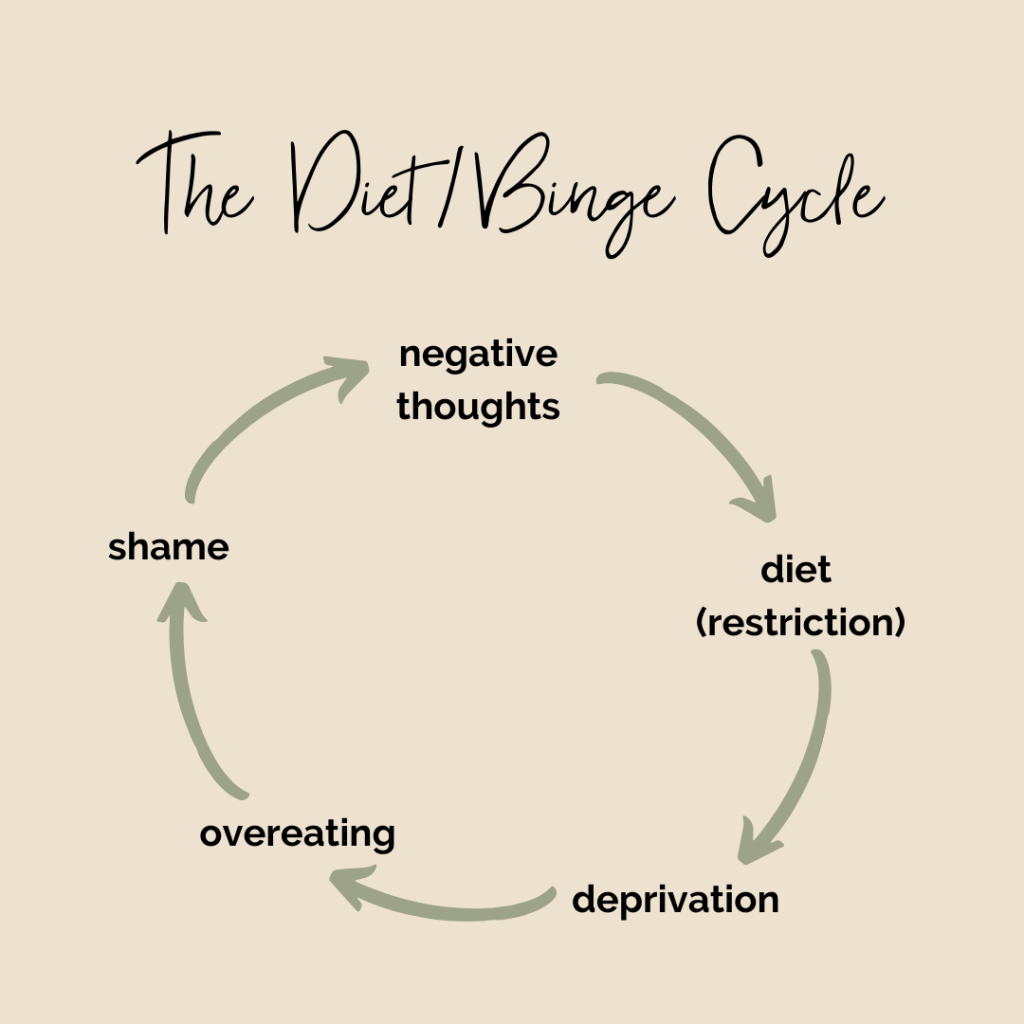 According to Conason, treating BED from a restrictive perspective can make it worse. “Weight-inclusive care is imperative to helping people with binge eating disorder,” she says.

Weight-inclusive care emphasizes health and well-being as multifaceted. In other words, you’re treated as an entire person, not a number on the scale. And providers who practice this model won’t assume anything about your health based on your weight.

Exposure to dieting and weight loss messaging can make BED worse, which is why it’s so important to seek help from the appropriate professionals. Weight loss programs are not only not helpful for folks with BED, they’re downright harmful.

Restriction or food rules of any kind can derail BED treatment, including counting macros, controlling portion sizes, “eating clean,” avoiding “junk food,” and so on. If you’re not sure if what you’re doing is restrictive, talk to a registered dietitian who is trained in BED treatment. 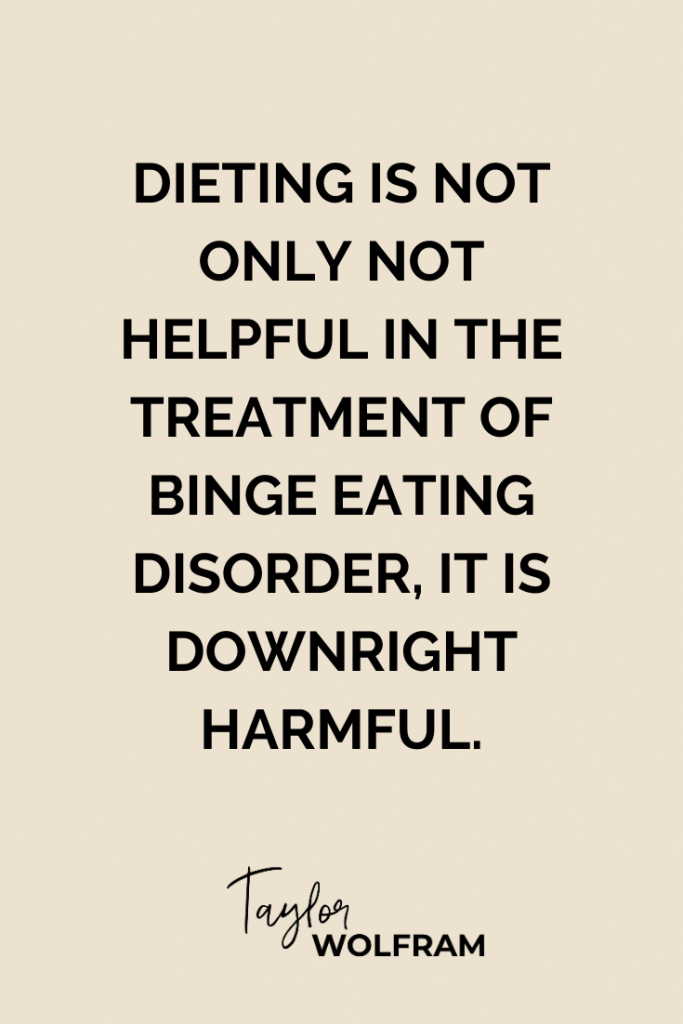 You can call providers and ask about their experience with BED and if they practice weight-inclusive care. You deserve compassionate and non-judgmental care!

Pershing, A. The Many Faces of Binge Eating Disorder. Published January 27, 2020.