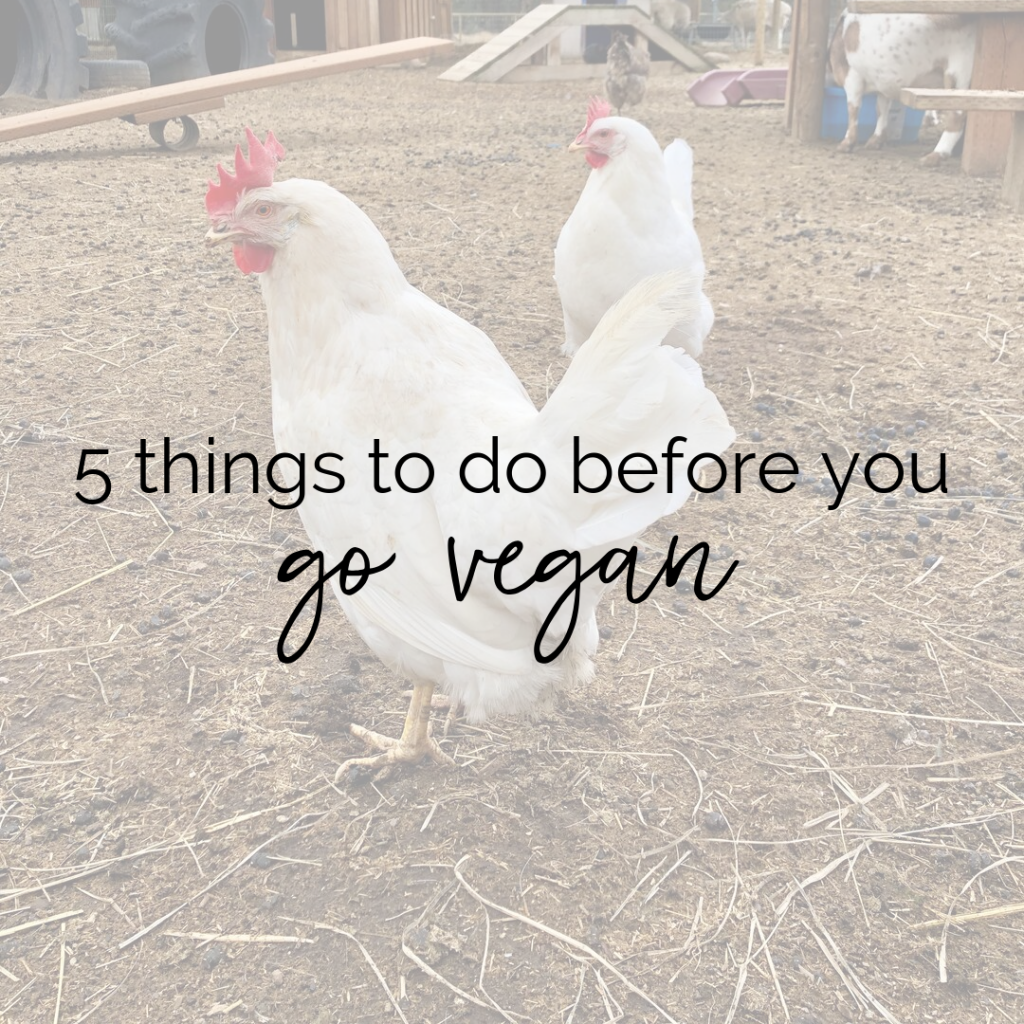 Want to go vegan to live a more compassionate lifestyle? Awesome! Before you dive in, there are a few things you may want to consider to make your vegan journey a little easier.

So, why vegan? Well, the obvious reason is to be kinder to animals. Many people understand that not eating meat helps save animals because animals clearly have to die in order for us to eat their meat.

But what about dairy and eggs? Taking milk from cows and eggs from chickens doesn’t hurt them, right? Wrong. I’ve found that most people have no idea what happens in the dairy and egg industries.

Vegan for the Animals

For one, cows only lactate, like humans, when they’re pregnant or have a nursing baby. Cows are artificially inseminated and then once they give birth, their babies are taken from them (usually the females are raised for dairy and the males are raised for meat and veal – so, supporting the dairy industry means also supporting the veal industry) and they’re hooked up to machines to keep them lactating.

Cows bellow for their babies and the babies miss out on important antibodies and nutrients from their mothers’ milk. And when dairy cows become lame, they’re sold for meat. There is also lots of documented abuse of cows and calves in the dairy industry.

Some people think cows are these magical milk animals and they’re not. They’re mammals who produce milk for their young, just like we do.

When it comes to egg-laying hens, they’re often crammed so tightly in cages stacked in dark, disgusting sheds that they each have less space than a sheet of paper to move around on. Many are sick and injured and don’t receive the care they need. They’re treated like commodities.

They’re bred to overproduce eggs and this puts immense stress on their bones and bodies. There is loads of abuse happening in the egg industry as well. And sadly “cage-free” and “free-range” doesn’t mean what most people think, either.

I could go on about animals used for wool, leather and testing cosmetics, but I’ll stop there. If you’re reading this post, it’s likely you’re aware of at least some of the atrocities of animal industries, which is why you’re interested in going vegan!

Perhaps you know about the impact of animal agriculture on the environment and are passionate about halting the climate crisis. Eating lower on the food chain (aka more plant foods) is a key way that we as individuals can reduce our carbon and water footprints.

There are so many reasons why going vegan is a kind choice!

So, you have all this important information and want to minimize your use of animal products. Wahoo!

Lucky for you, there are more vegan alternatives now than ever. More people know what vegan means, grocery stores are carrying more fun vegan products and restaurants have more vegan options. It really is a great time to be vegan!

However, going vegan is a huge lifestyle change that is counter to our dominant culture. It can be challenging in a number of ways. While we’re all on our own unique journeys, I’ve found there are a few key things that are important for everyone to consider when they decide to go vegan. 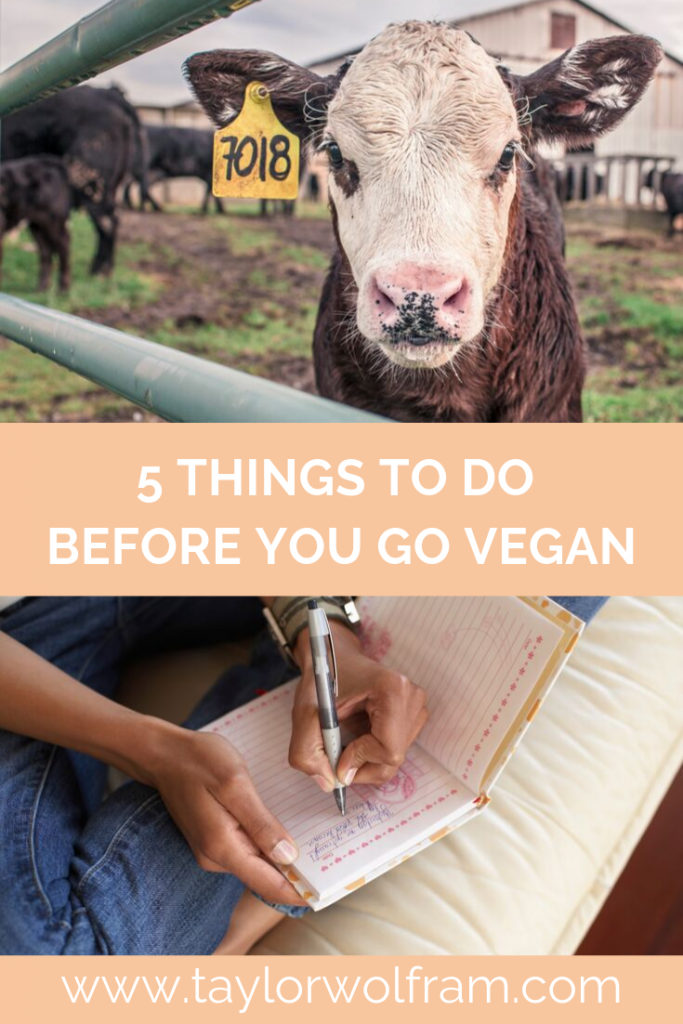 Veganism is not a diet. It’s a lifestyle that reduces use and exploitation of animals as much as possible. While it’s OK not to go vegan overnight, it’s not OK to call yourself vegan while still consuming animal products through food or clothing and supporting animal exploitative industries such as zoos and circuses. It’s not honest and it misrepresents the movement.

If you want to be vegan and are working on getting there, that is so amazing! Remember that you don’t need to label yourself. Of course, it can be easier to use the term vegan when clarifying your dietary preferences.

RELATED: What Does It Mean to be an Ethical Vegan?

Write Down Why You Want to Go Vegan

This one is super important! Especially because there can be diet-y motivations tangled up in ethical motivations to go vegan. If you’re not sure, just start writing about why you want to go vegan. You can break it down into categories and even identify those which may be harmful to your relationship with food.

If you’re motivated to go vegan for health reasons, consider what about veganism you expect to impact your health. Even for vegans motivated by ethical reasons, disordered eating is a risk.

What will going vegan look like for you? Will you do it slowly over time? If so, how long? Do you want to go vegan overnight? If so, is that realistic?

You’ll find vegans all along the spectrum of how long it took them to make the lifestyle change. There is not one right answer.

I personally think that going vegan over a period of time, rather than all at once, is the most realistic and sustainable.

Remember: you’re in this for the long haul. While you may be anxious to nix all animal products ASAP, you have to consider what will help make this a long-term change rather than a short-term phase.

I recommend reading the book How to Create a Vegan World: A Pragmatic Approach by Tobias Leenaert. You can also listen to a podcast episode with him on The Plant Powered People Podcast.

Talk to Your Partner(s) and Family

This one may feel particularly challenging, especially if you don’t feel that your partner(s) and family are very open-minded or supportive of alternative lifestyles.

However, it’s important to share your values and motivations with those who are closest to you. Veganism will touch almost every area of your life and impact your dining and entertainment decisions.

Rather than preaching or trying to convince others to go vegan, focus on why you want to live a vegan lifestyle and why it’s important that they support you. Being open about your decision rather than trying to hide it will make it much easier on everyone. 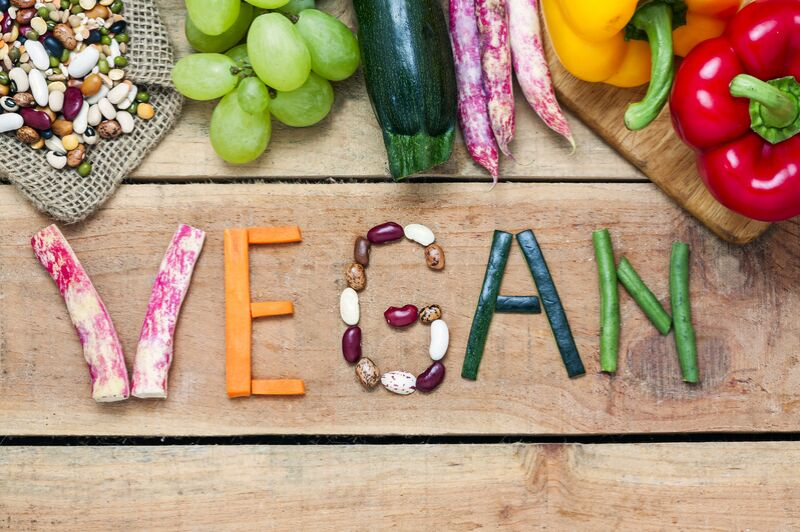 Learn How to Eat Vegan Healthfully

Before you start eliminating all animal foods, make sure you know what a balanced vegan eating pattern looks like! While you can get all the nutrients you need eating 100% vegan, that doesn’t happen on its own.

I  created an online course that tells you how to meet your nutrient needs through vegan food, beverages and dietary supplements, without restriction or diet culture nonsense!

It’s a good idea to work with a vegan registered dietitian to make sure you know how to build nutritious and delicious vegan meals and snacks. They can help you with meal planning, supplement recommendations and more. I offer one-on-one nutrition counseling and lifestyle coaching for vegans and can work with you on feel-good, healthy habits that are realistic and sustainable.

The ultimate goal of these strategies is to make your vegan transition as smooth as possible. There will always be challenges and that’s a normal part of the process.

Ready to go vegan? Make sure you read 10 Strategies to Help You Go Vegan!

Keep your motivations front-and-center. Regularly check in with your mental health. If you feel yourself getting extra anxious, consider backing off. Work with a therapist and dietitian as needed.

Are you afraid of vegan meats, cheeses and other g

It's holiday week here in the United States with T

Just a few days left in World Vegan Month! 💗 I

Are you a vegan in need of support for eating diso

💬 What does a healthy relationship with food co

Do you know why the omega-3 alpha linolenic acid (

Raise your hand if you're tired of seeing veganism